I recently posted a new blog to Huffington Post (which can be found here) about what I want individuals to know when they walk in the door to their first day of counseling. Each thought is something that I’ve wished, at one point or another, that my new clients could know before walking in the door.  They are things that I think could make counseling – and me as a counselor! – less intimidating.  It’s written with my therapist hat on, rather than my food-allergy hat.  Sometimes starting from scratch means cooking, and sometimes starting from scratch means allowing someone else in to help – which is what I hope to do in my work as a mental health counselor.

Savannah Snapshot – Toes in the Sand

This trip wasn’t all about food and food allergies.  It was also about having girl time, exploring a new city (and shopping), and sticking our pale white winter toes in the Georgia sand.

One morning after breakfast, we took a cab out to Tybee Island.  I brought with me food that I had packed, so that I could have a mental break from the hypervigilance of eating while traveling.

We walked through a pavilion out to the end of a pier, soaking up sunshine and taking in the ocean breeze. 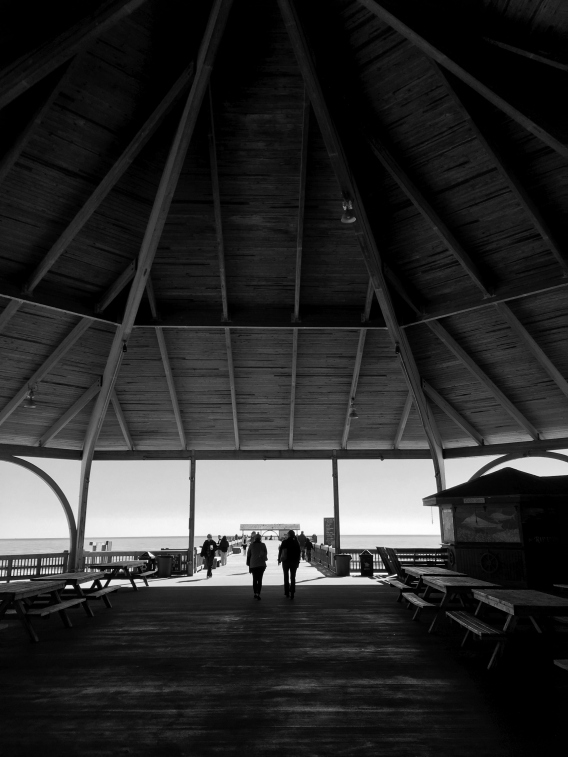 We may have also taken some glam shots, though I won’t post those here…

After walking by the water, we found a swinging bench and made ourselves comfortable with the sun, sand, and breeze.  At the end of a winter in New York, we were in need of some sunshine!

Comments Off on Savannah Snapshot – Toes in the Sand

On our last morning in Savannah, my sister and sister-in-law and I went to have tea at the Gryphon Tea Room.

Back in December, my sister-in-law had presented me with a tea cup for Christmas. “What a pretty tea cup!” I’d said. (And it is a very pretty tea cup). “Yes,” said my sister-in-law, “And it’s also representative of the tea we will have together in Savannah!” She had picked out an activity that would be fairly food-safe for me, had researched where to go for tea in Savannah, and made a special invitation for me.  In January, I crafted a “vision board” for the things I hoped to accomplish in 2016, and the invitation to the Gryphon Tea Room was the first thing to go on it.

We strolled from our hotel to the tea room, enjoying the dappled sunshine in each of the squares we passed.  We pointed out the landmarks we had heard about on our trolley tour and picked out our favorite houses, where we would want to live if we lived in historic Savannah.

We arrived to the restaurant and found that it was affiliated with the Savannah College of Art and Design (SCAD), where we had visited earlier that weekend!  The wait staff of the tea room were all students of SCAD, and we immediately pestered our waiter with questions about his studies.  SCAD has done a lot to renovate old buildings in Savannah, and the impeccable design taste throughout the city (interior and exterior) are clearly influenced by the school. The Gryphon Tea Room was no exception; the restaurant had had several previous lives, including as a pharmacy and the bookstore for SCAD.  The floor was carpeted and the walls were covered in dark wood bookshelves. The rich history had been renewed, as it has in much of the city.

We each ordered tea and scones, and I handed the waiter my orange allergy card (though I assumed that scones were fairly safe).  He returned in a flash with the manager, who informed me that she had baked the scones herself and that today’s had no peppers or tree nuts in them, but that I should stay away from one of the little treats my sister had ordered as it had almonds.  I thanked her and turned with delight to my scones with jam and clotted cream. (I hadn’t had clotted cream since living in England right after college!).

I’ll admit, I ordered coffee instead of tea. But it wasn’t really about the tea at all – it was about experiencing living history, scones, and savoring a morning in Savannah. 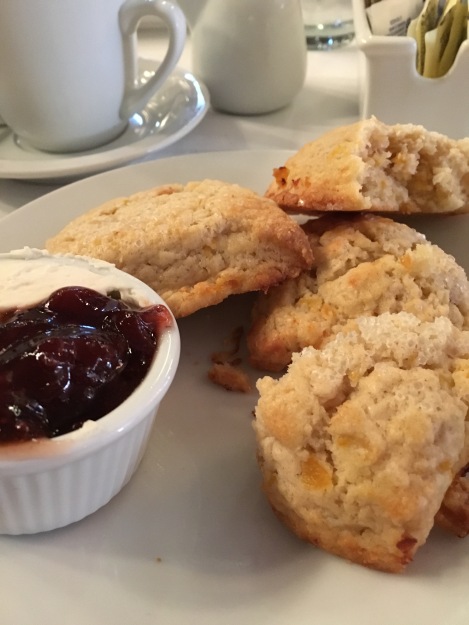 Comments Off on Savannah Snapshot – SCAD and the Tea Room